I've done some research and discovered that air quality in Brixton has been steadily deteriorating since the start of the year and is now hitting dangerous levels in Brixton.

This is a graph plotted using the Kings College London Air Quality data from the monitoring station in Brixton, which shows average levels of PM10 particulates since the beginning of the year. 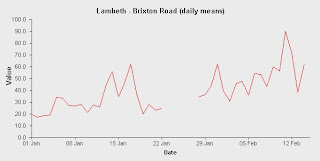 These are invisible particles which cause damage to the lungs and airway causing coughing, wheezing, shortness of breath, aggravate asthma – including lifelong respiratory disease, and even premature death.

The London Mayor has now accepted that around 4,200 people are dying as a result of long term exposure to air pollution in the capital each year.

The trend upwards also masks “spikes” in levels during the day. This graph shows that it has sometimes hit levels of 140 where the advice is that people with asthma or other lung conditions should avoid the area, and certainly the elderly and children should stay away. 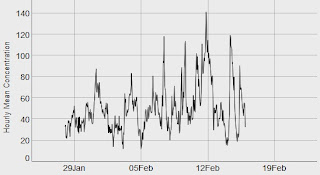 These are some of the worst levels in London. To give you an idea of how this compares, the average reading in Brixton last year was 39 – and even this exceeded the government’s stated target.

The pollution monitoring station is located on the Brixton Road, just north of Brixton station.

At the end of last year we made public our findings that almost 50 of Lambeth’s schools are located close to London’s busiest, polluted roads. Two weeks ago we invited air pollution expert Simon Birkett down for an air quality summit to see what might be done.

I will ask Greens on the London Assembly to raise this urgently and ask Lambeth Council if they are even aware of what is going on. Lambeth don't seem to have produced an air quality report since 2009.
Posted by Jonathan Bartley at 09:12